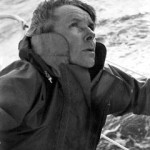 Rudy Thompson, a great sailor and realtor in the Virgin Islands community. Born on May 13, 1929, in Birmingham, Ala., his spontaneity and love of adventure defined his life and all of the wonderful events encompassed within his 80 years.

After a weeklong voyage from Miami to the Caribbean, Rudy’s arrival on St. Thomas was unintentional, as his boat was shipwrecked off the coast of Puerto Rico. Such an incident did not deter him from pursuing his love for the ocean and boating; his arrival in late 1949 facilitated his passion, as he operated a sailboat-chartering business throughout the Caribbean.

His love for the water and boats contributed to the many successes he experienced both on and off the water. Throughout his 60 years in the Virgin Islands, Rudy competed in hundreds of sailing regattas and captured the grand prize at many of these events. Some of his successes included a silver medal at the CAC Games, four Rolex Regatta titles and wins at many local races. Determined to place the Virgin Islands on the map within the sailing community, he played a major role in the organization of some of the Caribbean’s greatest sailing regattas, including the Sunfish Worlds in 1972, and was a member of the Virgin Islands Olympic Team.

Rudy is most known for being an asset to the Virgin Islands sailing community, but it was his infectious and caring personality that will keep him in our hearts forever. He was a man of good nature and great talent who had a way of making everyone feel like the most important person. 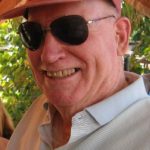 Richard (Dick) Johnson was born in 1923 in Chicago, joined the US Navy at the beginning of WW II, and served on the carrier USS Franklin. While on the USS Franklin the ship was bombed off the shores of Japan and due to the ship exploding in flames, Dick jumped over the side into the sea and spent 17 hours in the water. He was finally rescued by a destroyer that had been told to stop looking for survivors, but fortunately for Dick, they still kept on looking.

Dick visited St. Thomas in the 1960’s after an insurance meeting in Puerto Rico and returned many times to charter boats from Avery’s Boathouse in Frenchtown. He eventually decided to move to the Virgin Islands and sailed there via Acapulco from California on his Caulkins 50 “Yonder” in 1968. With the Virgin Islands due to compete in the Olympics for the very first time that year, Dick stopped in Mexico while in route and assisted as team captain. Sailing for the VI was Rudy Thompson and John Hamber in the Flying Dutchman and Per Dohm in the Finn.

From that time on, Dick stayed in St. Thomas and became very much part of the community. The year 1976 was a good one for Dick, as he married Louise Holmberg (mother of Peter & John Holmberg) and represented the USVI at the Olympics in Toronto in the Soling class with crew Tim Kelbert and John Bussing.

Dick was well known for his love of racing and how well he did, particularly with the Carter 37 “Caviar”, where he managed to win most of the trophies they raced for.

In 1980 he became a dealer for J Boats and went into partnership with Walter Fischer and Bob Neil in the J24 “Sting”. They won Antigua Sailing Week that year and many others throughout the Caribbean on the “Sting”.

Dick became one of the first International Judges appointed by IYRU in 1989 and sat on many juries in the Caribbean and around the world.

In 1989 Dick reunited his old crew and chartered the Frers 49 “Ice Nine”, winning the Overall Trophy at the St. Thomas Rolex Regatta.

Almost ten years later in 1998 he chartered the maxi “Matador” for another trip down memory lane and raced in the Rolex Regatta, St. Maarten Heineken Regatta and Antigua Sailing week. Although no silverware was had this time round, all on board had much enjoyment.

Dick was the President of the VI Sailing Association for 25 years. He was also the Caribbean Area O representative at the International Sailing Federation (ISAF) for 25 years and rose to the level of counsel member.

Dick died in 2005 after taking a trip along the East Coast of the US with his family on board their trawler. The plan was to sell the trawler afterwards and buy a “Picnic” boat and he wrote the deposit check from his hospital bed.

Many will remember Dick as a great sportsman and an all round good person with time and a smile for everyone.

Thank you Dick for all that you did for us in the Caribbean. 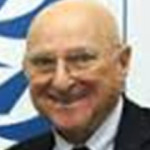 Henry Menin has long been a force on the Caribbean racing scene. At first, this St. Thomas-based sailor campaigned his J/29, Magnum VI, in many of the major spring regattas, winning the International Rolex Regatta in 1989. Today, Menin still loves being on the water—both in the Caribbean and around the world—but it is on an umpire boat rather than racing yacht. He’s risen to the level of the America’s Cup and says there are opportunities for other Caribbean sailors to pursue the officiating side of sailing.

It was prior to moving to St. Thomas in 1980 that Menin got his feet wet in the management side of sailing. “I started doing some officiating when I was coaching a small college sailing team in Philadelphia,” he says. “But my real immersion into officiating started in St. Thomas. John Nichols, a legend among race officials in the USA who had retired to St. Thomas, encouraged me and invited me to do some officiating locally. Then he started taking me to international events around the Caribbean and on the US mainland. However, while doing that, I continued racing very actively in the Caribbean, so one activity did not exclude the other.”

Menin’s role changed with the America’s Cup. “I had umpired and served on the America’s cup Jury in 1999/2000. As a result of that experience, I was invited by John Cutler to join the Oracle BMW AC challenge in 2001 as their rules advisor/coach and as their in house umpire. That was a commitment that would take me to New Zealand and away from St. Thomas for two years. At that point, I sold my interest in my sailboat and basically stopped racing for those two years.”

Since 2003, Menin has concentrated more on officiating, particularly umpiring in match racing, although he is also an ISAF (International Sailing Federation) judge.

Born and raised on St. Thomas, Peter began sailing at the age of four with his parents Richard, who competed in the 1972 Olympics, and Louise, Sunfish Worlds champion.

In 1988, at age 27, Peter won the silver medal at the XXIV Olympic Games, the first Olympic medal ever won by the U.S. Virgin Islands.

In 1992 Peter ventured into match racing and built a team of Virgin Islanders to compete on the international circuit. By 1999 he was ranked No. 3 in the world. Peter reached the pinnacle of match racing – a No. 1 world ranking — when he won the 2001- 2002 Swedish Match Tour Championship.

In 1996, Peter formed the Virgin Islands America’s Cup Challenge, a syndicate later calling itself Team Caribbean that would quest for the 2000 America’s Cup in Auckland, New Zealand. The syndicate united the people of the Virgin Islands and raised an astounding $5 million towards its budget. But unable to secure the necessary amount by the deadline to start boat construction, the team opted to merge with Team Dennis Conner in January 1999. Peter transitioned to the afterguard of Stars & Stripes, competing in the 2000 America’s Cup Challenger Selection Series where Team Dennis Conner ultimately finished third.

Late in 2003 Peter accepted an offer from the 2003 America’s Cup winner Alinghi of Switzerland to join the Defender as a helmsman. Then followed three years of intensive training and boat development in Europe, where in the contest that followed, Alinghi defeated Emirates Team New Zealand 5-2 in the finals to successfully defend the 2007 America’s Cup in Valencia, Spain.
Peter now bases himself in St. Thomas and offers professional sailing, consulting, and speaking services to clients world-wide. 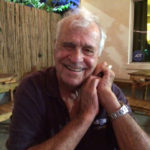 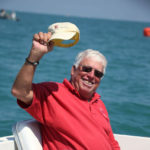 Involved in the sport of Sailing for over 45 years as a participant, official, and administrator.